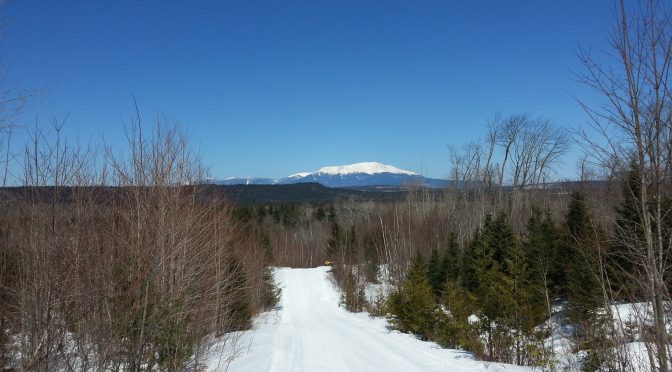 A big thank you to some friends of Mt-Katahdin.com for these recent photos of the mountain from various sites.   Joey Austin and Keith Dionne snapped these photos in the last week and we have reprinted them here with their permission.  Thanks again, guys!

Looks like some good ice fishing weather in Millinocket!

The local Native Americans (the Abenaki) called Bigfoot, Pomoola, long before the white man came to mid-Maine. It is often described as a “large, manlike creature with red fur.”

(all photos subject to copyright)

Summer/Autumn 2013: My brother lives in Medway, Maine and spends a great deal of time in the north Maine woods. Hunting, fishing and working; he spends a majority of his time in the broad wilderness area around Mount Katahdin. He was driving along the Grant Brook Road (map below) and saw this… Bigfoot or Pomoola or Sasquatch or… Whatever it is. Unfortunately, he didn’t have his camera so this was only taken with his phone.

He said, “It ran off.  I’m sure it wasn’t a stump but, not exactly sure what it was.  All I know is it looked like bigfoot to me.”

This was shot northwest of Millinocket, Maine in the Debsconeag Lakes Wilderness area. Just a bit south of Baxter State Park.

It sure looks like, something. And, I did a bit of research with the links, below and found that the “wild men” of Maine were very often described as having red hair, which this one obviously does.

My brother’s boss and avid Maine outdoorsman , Jim Stanley, says, “I know it was a squatch.  I’ve see two together within a mile from where this pic was taken.   We are currently working with game cams.”

Here are some other photos from the area taken by Stanley.

If you have photos, videos, stories about the Maine Bigfoot or “Pomoola” please email info@mt-katahdin.com.

Pomoola sounds slightly reminiscent of the word Pamola which is known to have been a legendary bird spirit that appeared in local Abenaki mythology. This spirit causes cold weather and was believed to be the local “God of Thunder.”  The word, Pamola, is still quite prevalent in the area of Millinocket and Katahdin.  The next peak along the knife’s edge from Mount Katahdin’s summit is “Pamola Peak.”  There is the Pamola Motor Lodge in town.  And let’s not forget Pamola Xtra Pale Ale from the Baxter Brewing Co. in Lewiston, Maine.  Obviously, quite a powerful word from the native tongue to have survived with such common usage to this day.

We, also, came across this great article online at the Bigfoot Encounters website.  We didn’t know there were so many documented cases!  The Native Americans called Bigfoot, Pomoola, long before the white man came to mid-Maine. Read from the website…

“The first sightings of the 1800’s that were reported and documented in the State of Maine occurred in and around the Mt. Katahdin area, what is now Piscataquis County, Maine and is located north-northwest nearby communities of Millinocket and Moosehead Lake region. The famous Appalachian Trail ends in beautiful Baxter Park at the highest elevation of just over 5200 ft., atop of Mount Katahdin.
The source of these reports came from a book titled “Camping Out” The book was published in 1873 and was authored by C.A. Stevens, published by The John C. Winston Company of Philadelphia, Pennsylvania. The original copy of this ancient book is owned by Chris and Amy Julian who have graciously shared the information in their book.

There are at least 6 stories of encounters with large man-like creatures, which the Indians called “Pomoola.”  It was also known as “Injun Devil.”

The book mentions the death of a trapper years before. He had been ripped apart and at the time it was thought to be a mountain lion. Who knows? The point that got the Julian’s attention was the fact that the body had been beaten against a tree trunk. Chris Julian went on to say, “I have heard mention that the book was fiction. I am not sure I agree considering the detail and the year it was written. I have checked many facts and to me these are factual accounts, -it’s a diary.””

More about Mount Katahdin and the Appalachian Trail

Mount Katahdin (pronounced: kah-Tah-din) is the tallest mountain in Maine at 5,269 feet (1,606 m or just shy of a mile). The mountain was named ‘Katahdin’ by the Penobscot Indians.  The term means “The Greatest Mountain” in their language. Katahdin is the centerpiece of Baxter State Park: a steep, tall mountain formed from a granite intrusion weathered to the surface above the treeline. The flora and fauna on the mountain are those typically found in other regions in northern New England. Katahdin has been known since time immemorial to the Native Americans in the region, and has been known to Europeans since, at least, 1689. Or, possibly, long before.  It has inspired hikers, climbers, journal narratives, paintings, local hit songs and a piano sonata. The area around the peak was protected by Governor Percival Baxter starting in the 1930s and is now known as Baxter State Park. Katahdin is the northern terminus of the Appalachian Trail, and is located near a stretch known as the Hundred-Mile Wilderness.

A great video shot across Millinocket Lake in Maine during evening and sunset.  The video starts looking at Mount Katahdin, the crown jewel of Baxter State Park and shows the viewer many views of the lake and Lake Road, leading to the lake.  The video ends with Mount Katahdin in late evening with a great sunset shot.  Thanks to user satajet883 at youtube for uploading the video.