WEST UNION, Ohio — Every year thousands of people hike the Appalachian Trail, but only a few hundred will complete the full length of the roughly 2,200 miles of trail from Springer Mountain in Georgia to Mount Katahdin in Maine.

Those who finish the entire trail in 12 months or less are called “thru-hikers”.

This year, Ron Birt from the West Union area was one of them.

Setting off from Springer Mountain on Feb. 24, Birt arrived at the summit of Mount Katahdin in Maine five months and one week later on Aug. 1.

Weeks ahead of schedule, he became one of the approximately 19,000 people who have “thru-hiked” the trail since it was established in 1937.

Every year, more than two million people hike the Appalachian National Scenic Trail – one of the most famous and longest hiking trails in America. Referred to as the “Appalachian Trail” or the “AT”, the route is approximately 2,181 miles long – making it the longest continuously marked footpath in the world.

Virginia boasts the most miles of trail – about 550 miles, while West Virginia claims the least with only four miles.

While maps are useful for trekking the AT, according to Birt, hikers can follow the trail simply by keeping an eye out for marks on trees and stones called “paint blazes”.

A former Bellefontaine police officer, 64-year-old Birt and his wife Denise moved to Adams County shortly after his retirement in 2013.

Looking for a challenge, he attempted to thru-hike the AT at that time, but was turned back when he developed a blister on his foot.

“I only made it half way,” he says. “But I learned from my mistakes and this time I knew how to prevent blisters so I was able to make it the whole way.”

To prepare himself physically for the trek, Birt trained on a treadmill and spent weeks packing a backpack on extended walks near his home.

“You can’t just jump up off the couch and start walking the AT,” he says. “As much training as I did, when I got out there, I decided to take it slow in the beginning, so I was able to increase my miles per day as the weeks went by.”

Starting out, Birt carried a 30-pound backpack filled with heavier winter supplies, a tent, a sleeping bag, cook stove, blow-up air pad for sleeping, one change of clothes, hiking poles, a water filter, and a four-day supply of food. When summer arrived, he lightened his load by sending his winter supplies home.

He never allowed the enormity of what he was attempting to discourage him.

“I didn’t think about that,” he says. “I took it one week at a time and always kept my goal simple – reach the next town.”

Trekking up and down unfamiliar mountainous territory isn’t without its dangers.

Hikers must be wary not only of the terrain, but also of the wildlife they’re likely to meet.

“I ran into four different bears, but they didn’t pay much attention to me. I saw rattlesnakes and copperheads, but they didn’t try to at strike me,” says Birt. “There was all kinds of wildlife, but I had no problems at all from that.”

The greatest danger Birt would face came not from animals, but from the weather. He awakened one morning in the Smokey Mountains to find himself buried under a heavy blanket of snow.

“I woke up in my tent, and it was completely dark. I thought it was night time, but in fact, it was daylight,” he says. “I dug myself out and hiked to the nearest cross roads through thigh-high snow until I got to New Found Gap where I called to have a shuttle come pick me up, but it was so bad, the roads were closed, nobody could get in or out.”

Birt, another “thru-hiker”, and a family of eight who were also hiking the trail, were forced to find shelter for the night.

“There was a heated restroom at the Gap which was unlocked, so we took refuge there and the next day, I tried to walk into Gatlinburg,” he said. “I got about six miles down the road then a snow plow picked me up and took me the rest of the way in.”

While most people who hike the AT start out alone, they don’t remain by themselves for long. During his trek, Birt met a young couple from Alabama.

“I began hiking up with them, and we ended up summitting together, even though they started after I did.”

All hikers on the AT earn unique trail names – Birt’s was Buckeye, and his two companions were called Pickles and Blueberry.

He says the hike is somewhat easier when it’s shared with others.

“You look out for one another, even though you don’t necessarily hike together,” he says. “It’s like a trail family. At the end of the day, it’s not unusual for 10-15 hikers to stop at the same spot. Some sleeping in shelters, some sleeping in tents, but you’re all in the same area because you try to camp together where there’s water spots.”

Passing through the southern states hikers come across multiple towns where they can rest and refresh their supplies.

However, in the northern states, the towns appear less frequently.

“Once you get into new Hampshire and Maine, the towns become more sparse,” says Birt. “You have to travel a lot further before you can resupply.”

Especially trying is the “100-Mile Wilderness” section of the trail which runs through the state of Maine.

Birt and his companions could only carry enough to last through half the trek.

“We had to make arrangements for the remainder of the trail,” he says. “When we got half way, we had a hostel drop off food to re-supply us for the second half.”

A group known as the Trail Angels also look out for the hikers. Along the trail they leave supplies for hikers known as “Trail Magic”.

“Sometimes they’ll even set up a tent and cook hamburgers and hotdogs to feed the hikers,” says Birt.“ They’re really a great bunch of people.”

Birt says his most awe-inspiring moment along the trail came when he reached the White Mountains of New Hampshire, where he climbed the AT’s highest point at Mount Washington, elevation 6,000 feet plus.

“It was magnificent,” he says. “Once I got on the ridges above the tree line, I just sat and spent a couple hours enjoying the view.”

Birt says the best things he took away from his AT experience were a sense of accomplishment and the friendships he formed along the way.

“The last four or five days on the trail you’re anticipating that’s it’s coming to an end, and part of you wants to get it done because you’ve been away from home for five months,” he says. “On the other hand, I was sorry to say goodbye to the young couple I was hiking with. It was bittersweet, but I was glad to be going home.”
64-year old former police officer walks 2,000 miles in five months 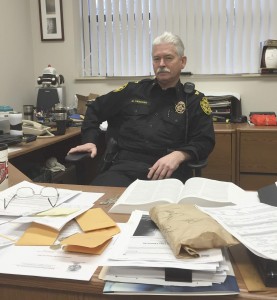