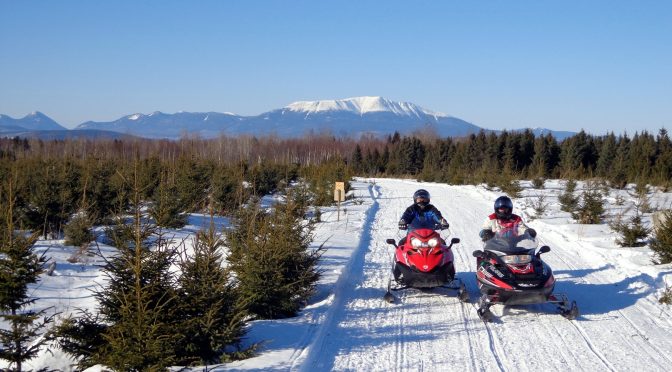 Here is a photo of Mount Katahdin in the background as two snowmobilers pass.  It was a crystal clear day and very cold.  Perfect for taking this great shot!  Thanks to Rick LeVasseur from 5 Lakes Lodge for the great photo and Maine-Snowmobiling.com for showing it to the world!  Oh, and thanks for letting us share it, too!

A new report from the Maine Department of Agriculture, Conservation and Forestry reveals that there are 145 different species of spiders on and around Mount Katahdin, including five that have been previously unidentified.

The Maine Forest Service report is based on the scientific collection and identification work done by scientists Daniel T. Jennings, Charles D. Dondale and James H. Redner from Maine and Canada and provides scientific knowledge that could provide baseline information on habitat and recreational-use effects in the park, according to Charlene Donahue, MFS forest entomologist.

None of the 145 different species of spiders found were poisonous, as Maine has no native poisonous spiders, the MFS forest entomologist said. The five previous unidentified species are unique to the North American alpine environment found on Katahdin and some of them have also been found on Mt. Washington and in Quebec.

Some Katahdin specimens are available in the MFS insect collection, while others are being kept at the Harvard Museum of Comparative Zoology, Cambridge, Mass.

As part of its mission, the state’s Forest Service frequently publishes technical reports on a variety of scientific subjects, from invasive insects to silviculture, as a way to support Maine landowners, forest managers and businesspeople.

A checklist of documented spiders is available at www.maine.gov/doc/mfs/idmhome.htm. For more information about the Maine Forest Service, go to www.maineforestservice.gov.